The day I went to Maui for the Hay House Writer’s Workshop… a retelling of a previous post: (http://heresyman.com/yesterday) 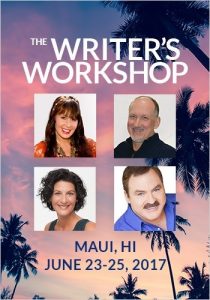 Awake at 2:00a, out of bed around 3:30a. Things went very smoothly. Left the house by 5:30a to head to LAX. Arrived at the parking Spot around 6:15a. Caught the shuttle and arrived at the terminal by 6:30a… two hours before the flight time. So far, so good. I laughed because the TSA PreCheck line was much longer than the regular line. I took note of people who went through the regular line and saw them on the other side. They had made it through before me. Still, TSA PreCheck was easy and quick… no removing shoes or computers. Just put bags through the x-ray and walk through the metal detector. (They do randomly put people through the full body scanner, but I wasn’t selected.) Again, so far, so good. I was sitting at the assigned gate by 6:50a. Nice… 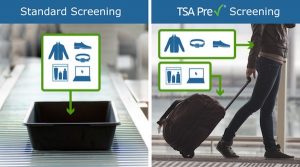 I had just settled in to read for the next 30 or forty minutes when it was announced our flight was moved to another gate. No problem… gathered up my stuff and moved 5 minutes away. Interrupted reading time is a bother, but… meh. The clock reached the 7:55a, boarding time, when it was announced there was a slight delay… maintenance was still getting the plane ready. Perhaps a 30-minute delay.

After 30 minutes, it was announced that the maintenance guy found an electrical problem. Another 5 minutes later we were told they had to do an unscheduled oil change… which required running one of the engines up before we could board. Perhaps another 30 minutes… sorry. At 8:30a (just after our original flight time) it was announced that the aircraft was put out of service… sorry. Please stand-by while they get a replacement… details to follow. While you wait, we will provide you with some refreshments… please head over to the customer service room a few gates down. I waited another 5 minutes before heading down to that gate.

Around 9:00a came another announcement… sorry, the plane must be flown in. The flight is delayed until 5:00p. THAT announcement got everyone’s attention. A mad rush to the customer service counter. Mind you, this is the same room they had set up the refreshments in. Realizing I had a long wait, I wandered in and grabbed a banana, some granola bars, and a half liter of water. I saw the line to reschedule flights was long, with angry people. I went ahead and stood in line knowing there was little chance of another flight to get me to my appointment in Maui at 5:00p. I thought perhaps because I was alone there might be one seat available. The girl at the counter was very cheerful despite having to answer the same questions over and over. I explained my dilemma, she made a few calls… and answered the same way. Sorry, there are no other options.

I sent a note to the hotel telling them I would arrive late, please save my room. No problem there. I settled in for the day’s wait. I tried walking around the terminal to get some exercise… but it was just too crowded. I tried to read, but I was just too tired. I did read on an off through the day… but it was slow going. I walked by the Admiral’s Club (I am a member) to see if I could get in there… the sign said it was for International Travelers… so I opted to stay out. (Perhaps they would’ve let me in, but it looked very crowded. I did have access to the free refreshments in the customer service room anyway.)

During the day, the flight time kept slipping… it finally rested at 7:00p. Oh, and around 5:00p I noticed I had received a notice on my phone that the gate had changed. This was the final gate change… so I wandered over there and settled in. When boarding time finally arrived, I was in group 4, right after 1st class… so I was able to get to my seat and settle in before the onslaught. I had noticed on the status board at the gate there were 21 people listed on the wait list… so I knew it was going to be a full flight. My seat was a middle seat with very little leg room. The window seat next to me had no seat in front of it because it was the row next to the emergency exit. I held out hope that the people with the seats on either side of me were together and would ask me to switch with one of them. I waited… and waited… until they announced everyone was aboard. To me delight, the seats on either side of me were still empty… perhaps the only two empty seats on the plane! I moved over to the window seat and stretched out. It was a good flight and I was able to get a little sleep during it.

Arrived at Maui around 9:30p… rushed out to ground transportation to find out that I had just missed the last shuttle bus to Ka’anapali. My only option was a cab. Yikes. On the plus side, another guy needed a taxi and asked if we could share since he was going to Lahaina. No problem… it was a good, interesting cab ride.

Checked into the hotel at 10:30p, a half hour after the first session of the writer’s conference had ended. 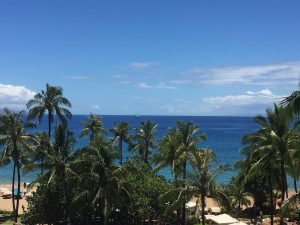 Oh well, a nice room with an ocean view…