Stever Posted on July 4, 2021 Posted in Book Report, Strait from Stever No Comments 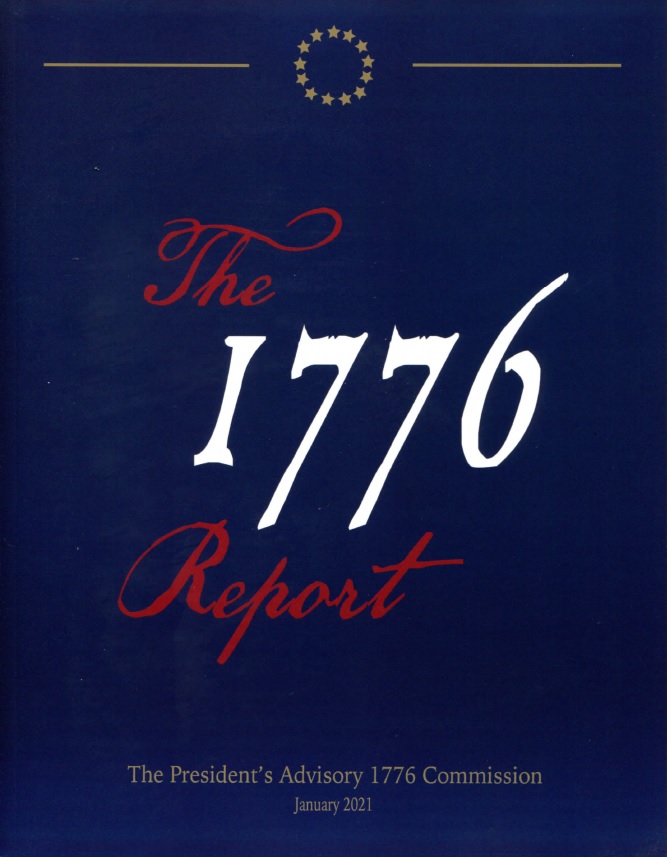 I ordered this when it first came out, but I set it aside because the insurrection had occurred…

and even four months later, people weren’t coming to grips with it. 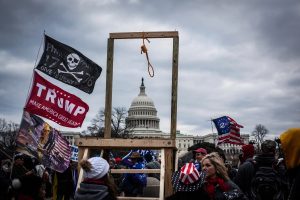 …it was just too soon for me to give it a fair read.

Since today is 12 score and 5 years (245 years) since the signing, I thought it was about time to pull it out and give it a read, which I did yesterday. This is my overall review of the report, but keep in mind, I am still mulling it over. 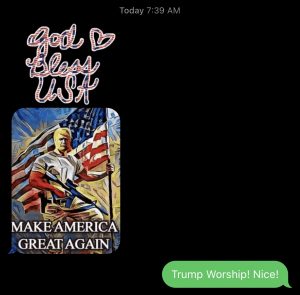 Even this morning a family member texted me: 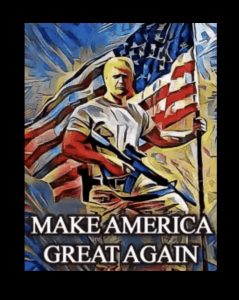 I just don’t understand the Trump Worship in this Country. Seriously, what is this? It used to be God and Country, is it now Trump and Country?

Perhaps my family thinks it is funny to prod me with texts like this, but my response was what I felt. But, I digress.

Allow me to start by showing the Table of Contents. I will make a note about each section as laid out in it. These notes are simply my opinion and reaction to reading this for the first time. 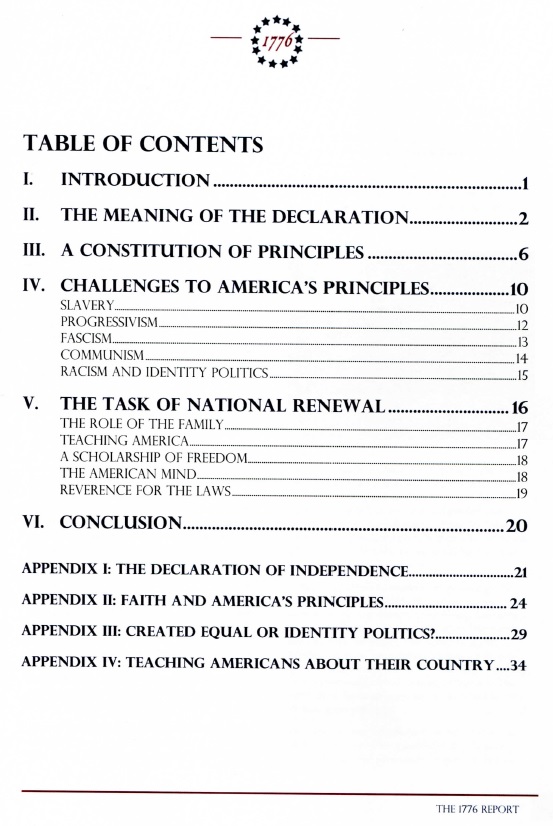 The stated purpose of the Commission is: 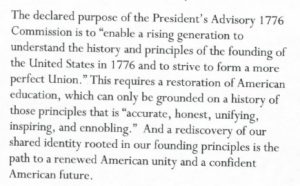 Okay, I will accept that for now. Honestly though, I feel I could write a post just on this paragraph. I am all for enabling people to understand history that is accurate, honest, unifying, inspiring, and ennobling. (Okay, I must admit, that last word reminds me of The Simpsons and Jebediah Springfield when he said – A noble spirit embiggens the smallest man.)

We are lead to believe that the truth, as Properly Understood will get us all in alignment. Fair enough. We are to learn that the American Government Principles which are for all people for all time.

Now here is a paragraph I can agree with. But, I caution you, we may have different interpretations of what it means. Not a problem. That is what dialog and interaction is all about. Seeing things from each other’s point of view. (Although we often spend more time thinking of how to make our point of view the one, shared point of view.)

As I read through this section, I wondered why the reader wasn’t invited to dialog about these things. Why not say, let us reason one to another? I have to say, right from the outset, this feels like we are being told what to believe. I believe the correct term for that is not education, but rather indoctrination. But, I do admit, I am a bit cynical in regard to this report. Am I wrong in assuming the implication is that this is what the President who commissioned this believes? The report is written like an Executive Summary… do you suppose he has read and approved this? Since this is based on timeless, unchanging principles, do you suppose the current president could pick it up and endorse it?

Section II – The Meaning of the Declaration

Again, we are told that the meaning of this must be properly understood. What is so difficult to understand about the five words “all men are created equal”? Is the word ALL or the word EQUAL in dispute? Perhaps the word CREATED implies a belief in God that some would have issue with. Is it okay to assume the word MEN implies both genders? This is why we must invite an open dialog to reach agreement in understanding.

It does bother me that the phrase “properly understood” is continually used. Perhaps the intention is to come to agreement in the understanding. That would make me feel like I was invited to become part of the process of understanding, and not just told what to believe.

As we are told in the first section, we must read the documents referred to in order to understand them. The first of these documents we are to understand The Declaration of Independence. It is included in the Report as the first appendix so we can read it for ourselves.

These documents are eternal because they are written by “practical men to solve real world problems”. Hmmmmmm, that seems a bit lacking to me. Yet, this is the reasoning given to prepare us for the next section. (Yes, I do wonder why a copy of the Constitution isn’t also included as an appendix to this report.

You know, after only 10 pages of this report and I am exhausted. I believe this list of challenges are meant to be a history lesson. The implication is that these challenges arose and were conquered successfully. Well, I know that it is not inferred by me, because I don’t believe any of these challenges have been defeated.

Progressivism – this is a belief that the founding documents are inadequate to handle modern problems. As we progress, we must change with the times. The argument here is, this is where the “Deep State” is established. This is a direct affront to the timelessness of the inalienable rights. We have conquered nature, so those rules don’t apply any longer. Yes, this is a debate worth having.

Fascism – It is funny to me how both sides accuse the other of Fascism. Both sides compares the other to the Nazis of Hitler. Perhaps both sides are right. Of the people, by the people. That is the issue. As the power slips from the hands of those in charge, they try to get a tighter grip. Yes, this is worthy of debate too.

Communism – charity is the cure for communism. Truly, if all men are created equal, why are some more equal than others? Social programs that help anyone must be paid for. Faith based charities, if they are working, will make communism fade away. Rather than call everything social communistic, why not brainstorm workable solutions? Again, here is a place debate would benefit.

I see I have used the word debate often in the above paragraphs. Please know my meaning of the word is meant to imply an open dialog. A discussion which brings about agreement.

Correct me if I am wrong… but the choice is to accept the truth or the lie. The solution is to raise a new generation of unquestioning citizens who accept the “self-evident” truth we are indoctrinated with. Sure, that may be a bit harsh, but seriously. I am reminded of the company that Earl P. Sinclair worked at in the sitcom Dinosaurs – “We Say So” which echoed the tactics of many parents when confronted by the question “why?” with the answer, “Because I said so!” Well, that is how this presentation feels… but let’s go on seeing what the task is defined as. It seems to be targeting four areas:

The Role of the Family – which brings up the question of who teaches the family this role? What is to be done about the family which is NOT filling this role? Oh, there is a lot of room here for discussion. Let’s start by agreeing what the definition of a family is.

Teaching America – what does this mean? If it means, as stated, the obligation is to teach how to read, write, and do math… then what? There is an allusion to unconditional love here… but how is that taught? Oh, and why is that allusion not in the previous section about family? Seriously, this is saying we must instill an unconditional love for the country? What am I missing here? The State is responsible for teaching? How is this not the role of the family?

A Scholarship of Freedom – American Republicanism is the decree. This is freedom. Freedom to question the founding Fathers is basis of free thought. Questioning authority should be given answers that show truth. Did George Orwell write this?

The American Mind – ah, this is interesting. It defines an American Mind. It is true that culture leaders shape the voice of American minds… I think this is a call to action, but I have not seen anything that says what that action should be.

Reverence for The Laws

Truly my first thought in this is January 6th, 2021. Not leading by example there… and I am not just referring to the mobs that stormed the capital.

I am referring specifically to the response of the Republican Leadership to the event. Where is the example? Or is this a “do as I say, not as I do” thing? Let’s truly take a look at the solution provided by Abraham Lincoln. Let’s look at every word and agree what it means. Then we can decide if it is truly relevant and useful. 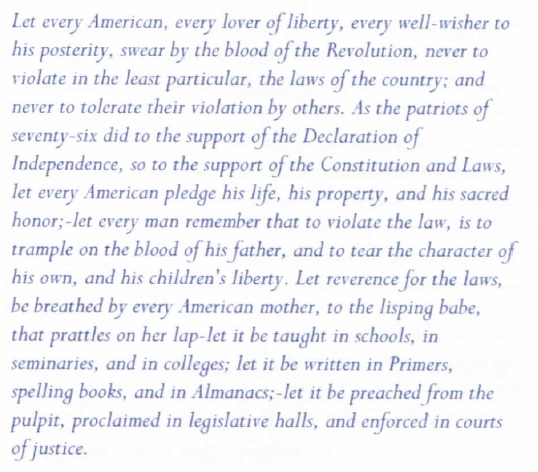 So, I admit to having cynicism distorting my read here. I am willing to have an open and honest dialog with anyone who is willing to approach this report truthfully. The idea the Declaration of Independence presents is valid for each of us as an individual. If we start truly from a belief that ALL are created equal, we will be unstoppable. If we live in that belief without compromise, we will make this happen.

If our leaders try to indoctrinate us without showing if in action in there own life, then the great experiment has failed.

As a final wrap up of this post, I would like to mention the reality of truth in the founding of this country. The fact is, there were people here before the colonies arrived. Ignoring this fact discredits the it in the same way of covering up any uncomfortable misstep of the past. Inclusiveness of all Americans is imperative. I didn’t open with this, so only those who have read this far will see it. This 20 page report has a LOT to discuss in it, and it should NOT be overlooked. It should be addressed and acted on. There is even more to open discussion in the appendices, but I have gone on long enough.

I will address the appendices separately if I sense an interest. The Declaration deserves its own post. I invite any reader to get a copy of The 1776 Report and read it for themselves. (One last comment, why was this report not provided for free online? Where do the proceeds go for the ones sold?)

Appendices
I – The Declaration of Independence
II – Faith and America’s Principles
III – Created Equal or Identity Politics?
IV – Teaching Americans about their Country