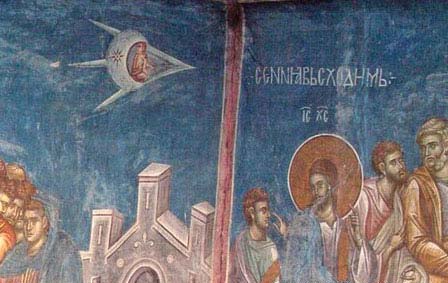 In a dream a few nights ago: I was traveling with David Wilcock (of Ancient Aliens Fame) and we stopped by my brother’s house. In the house was the ghost of my twin. I could see her, but nobody else could. She stood in a doorway we passed and my brother’s left arm brushed where she was. His arm involuntarily shot up and felt the area where she was, but he kept walking and talking. I was amazed that he had sensed her. In another room, a smaller version of her sat on the table listening. My brother walked to where she was and mindlessly his arm started probing where she was. He stopped mid-sentence and asked, “What is this?” I laughed as if it were a practical joke, and explained it was our late sister. Then I woke.

Twins are supposed to have some mysterious connection… perhaps. Not sure what the significance of that dream is, but it was memorable.

I enjoyed a new book by Michael S. Heiser called The Bible Unfiltered (new to me). It is a collection of articles from his blog. I enjoy his writing style, although I am perplexed by his surety. He obviously has a premise he starts from, but I haven’t seen him admit that yet. He flat out stated that the Tower of Babel was not a Stargate. It seemed like a non-sequitur, but he was talking about some emails he’s received from doubting believers. None the less, I will continue reading his perspective. I do recommend his books for study. Well written and obviously thought out.

Speaking of Ancient Aliens, (it was mentioned in the book as well as my dream), I am curious about the release of Ancient Aliens Unclassified and the four-hour episodes which have been airing lately. It seems as if there is a rush to get the information out. I really enjoy the show, but it is a real time-suck. There are a lot of new tidbits in this series, along with a lot of repeated, but enhanced information.

One thing I don’t think people admit is; angels, demons, and God are aliens by definition. They are all extraterrestrial, meaning they are not of this world. (NOTW is what some Christians believe they, themselves, are. They are only visiting this planet. (Oh hey, another Larry Norman reference! I do miss that guy.)