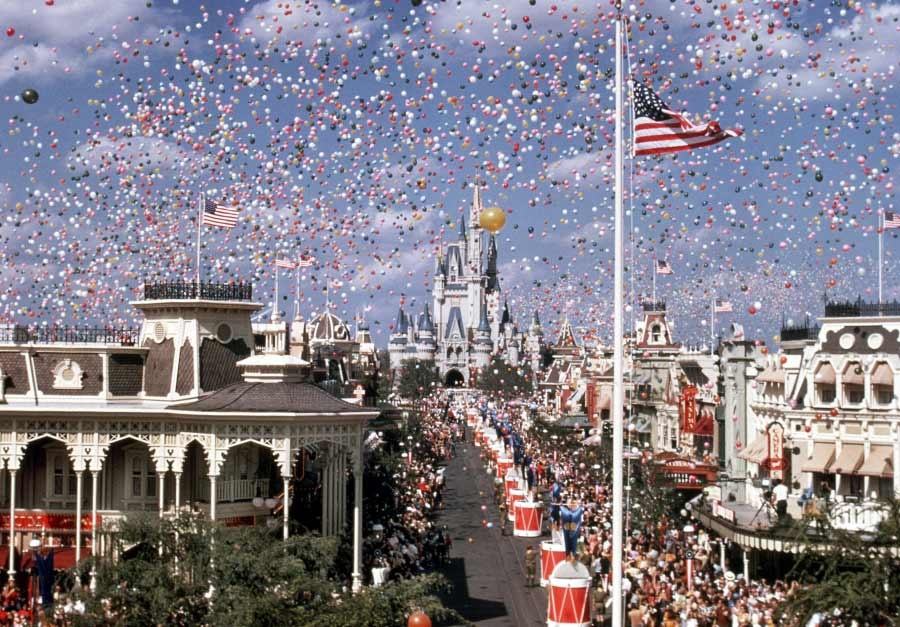 My first job at Disneyland, which I had when I was sixteen. At the time, Disneyland had a policy of hiring only people who were 18 or older, but a lessee could hire younger. (A lessee was a company which was not owned by Disney, but worked in Disneyland, ‘leasing’ the right to be there.) In this case, it was for Nat Lewis Balloons. This was the company who originated the famous Mickey Mouse balloon, which was their staple product. This particular job, however, was directly related to the twice daily parade they had. In this parade, there were several floats filled with helium filled balloons, which were released at several points during the parade. My job was to put helium in the balloons, tie the balloon, and slip it into the float by putting it under the bottom edge. My twin sister and I were both hired, and there was a team of six or eight of us. Another guy and I teamed up and became the fastest duo. We could fill up one and a half to nearly two of the boxes in the time the other teams filled one. Here is the best part of this job, which was “It’s easier to ask for forgiveness than permission” type of thing. I figured this out on my first day on the job. There were two parades, so we had to fill the floats up twice each day. The parade route started at the beginning of Main Street and continued down around the Matterhorn and behind It’s A Small World. The second parade reversed the direction to bring the floats back to the beginning for the next day. So, we would work around four hours each day, filling the floats behind scenes at the beginning of Main Street, and behind Small World for the second parade, which we did as soon as the first parade was complete. So, there was around an hour between, which we were allowed to enter the park if we wanted. Here is what I figured out the first day during this break. If I went to the main gate, I could exit having my hand stamped. Then I would come back into the park and go back to work. After work, I could spend the rest of the day in Disneyland if I desired. Which I did, quite often. Sadly, this only lasted for one summer, the end of that year, Disneyland bought Nat Lewis Balloons, so it was no longer a lessee. I would have to wait until I was 18 years old before I could work in the park again. It was at the end of the summer that I was hired at Shakey’s Pizza.