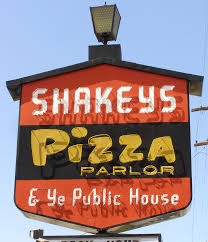 As I have journeyed through my career, I see how all of my previous jobs were foundation for subsequent jobs.

Shakey’s Pizza was my first job. Well, this is partially true… it was my first job outside of family. I had worked part time with my dad at the machine shop since I was thirteen. Just cleaning up machines, painting, and general gofer work. I was paid for this work.

When I turned sixteen I had saved enough money to afford to drive. My father had a second car which was available for me to use. Because of this previous work, and my access to reliable transportation, I was hired at Shakey’s shortly after my 16th birthday.

I had helped a friend cut down a tree in their backyard one Saturday. We worked hard all morning, and to thank us, his mother took us out for an early pizza dinner. While we were there, his mother pointed out a sign advertising a job opening. (My friend hadn’t turned sixteen yet, otherwise she would’ve had her son apply.) I went and asked for an application, which I quickly filled out there. When I handed it in, it happened to be to the manager. He sat down with me quickly to make sure I had completely filled out the paperwork and do a quick interview. He asked me if I had ever worked before and whether I drove, if I had a car.

He hired me on the spot and asked me to start the next day. It was the fact that I had worked already, and had transportation he offered me the job. (Of course, my friend’s mother expected a “finder’s fee” and made me promise to put in a good word for my friend when he turned 16.)

The next day I showed up early for the night shift as instructed. It was a short training shift. It was summer, so working late Sunday night was not an issue. My time card was already in the rack, and the manager had written my name on it. First name, and last initial. He wrote it in block letters and did not put a gap between the first name and last initial. The two women who worked the day shift called me Stever because of this, and introduced me this way to everyone who showed up for the night shift that day. It stuck. This name was the only name I had working there.

The moniker solidified in other social circles… and now all my friends call me Stever!