Stever Posted on June 7, 2017 Posted in Holy Sh*t!, It's in The Bible!, Memoirs of a Heretic, Popular Paradigms, Strait from Stever No Comments

Yesterday I decided to follow up on a mention of Donald Trump in Prophecy. A while back a comment was posted about Donald Trump wanting to move the U.S. Embassy from Tel Aviv to Jerusalem. One of my FB Friends had commented about how it must be done, because it is prophecy. I was intrigued, so I asked for a Bible reference. He responded that I should just Google it. I suggested that if he couldn’t respond with a reference, then it was not likely true. He said if I was so interested, I should look it up myself. My final response was “that’s what I thought”, implying that there was no reference. I let it go after that.

What had inspired me to follow up was an email from SkyWatch. It was an ad for a new book by Mark Taylor who had prophesied Donald Trump’s Presidency in 2011. 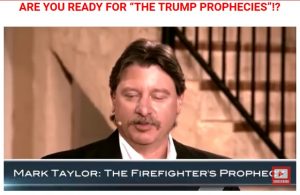 The new book is “The Trump Prophesies” to be released soon. The Jim Bakker Show is really pushing this… so, you know it’s real. 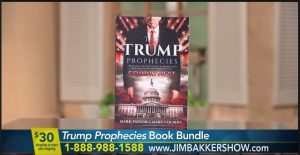 Intrigued, I did a little research to see who this guy is. A retired firefighter, apparently, who had been led to read Isaiah 45 and related it to the fact that Donald Trump would be the 45th President. (Personally, I would have been more impressed if the book was published in 2011 or 2012.)

There is a movement in churches now where they are teaching that Donald Trump is here by the Hand of God for the specific purpose of “Righting the Wrongs.”

I remember Isaiah 45 well from my years of daily bible study. This chapter mentions a leader named Cyrus whom the Lord will use for his purposes even though Cyrus doesn’t believe in him. The point of the chapter is to show that the Lord is in control and directly influences world affairs. It is done to PROVE that God is in charge. (This is a well-known prophecy which came true in the time of Daniel… see, writing down prophecy before it happens adds credence.)

Now, the wonder of this prophecy is that Cyrus was named long before he was born. He is lauded as messiah by Israel because he allowed them to rebuild the temple and re-institute daily sacrifice. Many believe this is exactly what Donald Trump is here to do.

If you argue that the current President is not named in the Bible, well, you will hear opposition. Clearly the Last Trump is referring to him:

15:52) In a moment, in the twinkling of an eye, at the last trump: for the trumpet shall sound, and the dead shall be raised incorruptible, and we shall be changed.

4:16) For the Lord himself shall descend from heaven with a shout, with the voice of the archangel, and with the trump of God: and the dead in Christ shall rise first:

Of course, this only makes sense in English… but that would be like God to hide something in plain sight. Something that would not make sense when it was originally written. But, I digress… There are quite a few articles written on this already. It does help explain why so many Born Again Christians applaud everything Donald tweets.

I expect many do not condone what Donald does, they just want it to happen quickly. They want the final judgement to occur. That Great and Terrible Day! I am reminded of what I consider the scariest verses in the New Testament.

21) “Not everyone who keeps saying to me, ‘Lord, Lord,’ will get into the kingdom from heaven, but only the person who keeps doing the will of my Father in heaven.

23) Then I will tell them plainly, ‘I never knew you. Get away from me, you who practice evil!’”

As some may remember I had posted long ago about the idea that Donald Trump is Antichrist. 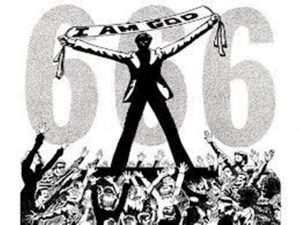 Those who study eschatology know it is generally accepted that the Antichrist is expected to help Israel build the third temple and re-institute daily sacrifices. So, I guess you could say I think President Trump is in prophecy too. This came up in the articles I was reading. One proof given that this couldn’t possibly be true is the fact that Trump is a pussy-grabbing womanizer. The reference given to back this up is Daniel 11:37. If you read certain translations, (like the King James Version), the verse is:

Neither shall he regard the God of his fathers, nor the desire of women, nor regard any god: for he shall magnify himself above all.

This verse is accepted as talking about the Antichrist, and it clearly exonerates Donald because he clearly has a desire of women. Personally, I prefer a different translation, the International Standard Version (ISV). This version translates this same verse:

He’ll recognize neither the gods of his ancestors nor those desired by women—he won’t recognize any god, because he’ll exalt himself above everything.

This would easily place The Donald back on the possible Antichrist list.

Do you suppose Adolf Hitler was the same as Cyrus too? He did cause the nation of Israel to be re-established, right?

For those of you who are curious about Isaiah 45, here it is in its entirety:

1) This is what the LORD says to his anointed, Cyrus,

whose right hand I have grasped

to subdue nations before him,

as I strip kings of their armor,

to open doors before him

and gates that cannot keep closed:

and he will make the mountains level;

and cut through iron bars.

3) I’ll give you concealed treasures

and riches hidden in secret places,

so that you’ll know that it is I, the LORD,

the God of Israel, who calls you by name.

4) For the sake of Jacob my servant,

and he has established you with a name,

although you have not acknowledged me.

5) I am the LORD, and there is no other besides me:

and there are no gods.

although you have not acknowledged me,

6) so that from the sun’s rising to the west

people may know that there is none besides me.

7) “I form light and create darkness,

I make goodness and create disaster.

I am the LORD, who does all these things.

and let righteousness stream down.

I am the one who says to the earth, ‘Let salvation blossom,

and let righteousness sprout forth.’

9) “Woe to the one who quarrels with his makers,

a mere potsherd with the potsherds of the earth!

‘What are you making?’

or ‘Your work has no human hands?’!

‘What are you begetting?’

the Creator of the signs:

“Question me about my children,

or give me orders about the work of my hands.

12) I myself made the earth

and personally created humankind upon it.

My own hands stretched out the skies;

I marshaled all their starry hosts.”

13) “I have aroused him in righteousness,

and I’ll make all his pathways smooth.

It is he who will rebuild my city

and set my exiles free,

but not for a price nor reward, ”

says the LORD of the Heavenly Armies.

“The wealth of Egypt, and the merchandise of Ethiopia,

those Sabeans, men of great heights.

They’ll come over to you and will be yours;

They’ll trudge behind you—

coming over in chains, they’ll bow down to you.

They’ll plead with you,

‘Surely God is in you;

and there is no other God at all.’”

O God of Israel, the Savior.

16) All of them will be put to shame—indeed, disgraced!

The makers of idols will go off in disgrace together.

17) But Israel will be saved by the LORD

you won’t be put to shame or disgraced ever again.”

who created the heavens—

and the one who formed the earth and made it,

and he is the one who established it;

he didn’t create it for chaos,

but formed it to be inhabited—

“I am the LORD and there is no other.

from somewhere in a land of darkness;

I didn’t say to Jacob’s descendants,

I, the LORD, speak truth,

declaring what is right.

20) “Gather together and come;

draw near and enter,

your fugitives from the nations.

Those who carry around their wooden idols

nor do those who keep praying to a god

21) Explain and present a case!

Yes, let them take counsel together.

Who announced this long ago,

who declared it from the distant past?

And there is no other God besides me,

a righteous God and Savior;

and there is none besides me.

all you ends of the earth.

For I am God, and there is no other.

from my mouth has gone out integrity,

a promise that won’t be revoked:

‘To me every knee will bow,

and every tongue will swear.’

All who raged against him will come to him

and will be put to shame.

25) In the LORD all the descendants of Israel

will triumph and make their boast.”