↓ Skip to Main Content
Home › It's in The Bible! › The Story of the Loving Father

The Story of the Loving Father

Stever Posted on July 20, 2017 Posted in It's in The Bible!, Memoirs of a Heretic, Strait from Stever No Comments Tagged with Doormat, Parable, Prodigal, Reliability, Taken for Granted 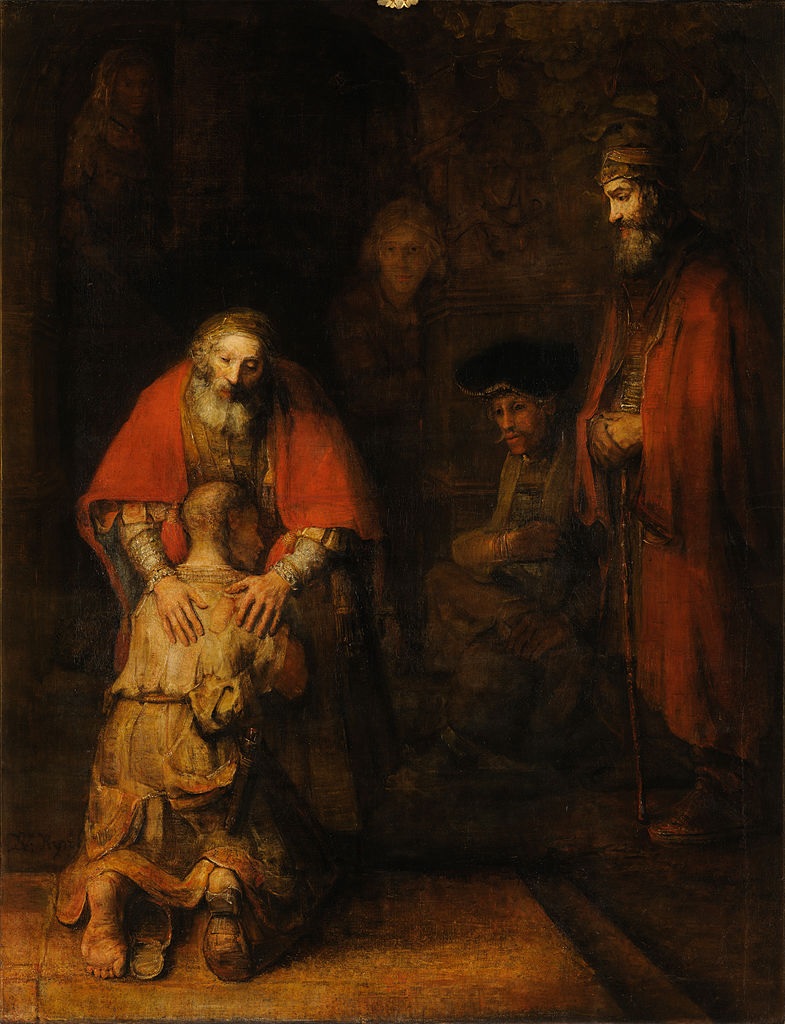 This is a story Jesus told his disciples… one of his parables. A story to carry a lesson. It is in the bible to teach all… Let’s look at what this story teaches us.

The Story of the Younger Brother and free will

11Then Jesus said, “A man had two sons. 12The younger one told his father, ‘Father, give me my share of the estate.’ So the father divided his property between them. 13A few days later, the younger son gathered everything he owned and traveled to a distant country. There he wasted it all on wild living. 14After he had spent everything, a severe famine took place throughout that country, and he began to be in need. 15So he went out to work for one of the citizens of that country, who sent him into his fields to feed pigs. 16No one would give him anything, even though he would gladly have filled himself with the husks the pigs were eating.

The shininess has worn off… the grass is not that green over here… in fact, it is burnt brown. Life is not rosy, in fact, it is detrimental to life. All is NOT well. He is reduced to feeding unclean animals and longs to eat the slop. People will happily help you spend your money! When you are out of resources, they are out of your life. Don’t you hate it when people can say, “I told you so!” (It’s fun to say that to others…)

17“Then he came to his senses and said, ‘How many of my father’s hired men have more food than they can eat, and here I am starving to death! 18I will get up, go to my father, and say to him, “Father, I have sinned against heaven and you. 19I don’t deserve to be called your son anymore. Treat me like one of your hired men.”’

The youngster comes to his senses and realizes that even the servants at his dad’s place were treated with respect. He admits he was wrong. This is big! Look how long it took for him to get here. So, he acted to get out of his rut… he TOOK ACTION!

20“So he got up and went to his father. While he was still far away, his father saw him and was filled with compassion. He ran to his son, threw his arms around him, and kissed him affectionately. 21Then his son told him, ‘Father, I have sinned against heaven and you. I don’t deserve to be called your son anymore.’ 22But the father told his servants, ‘Hurry! Bring out the best robe and put it on him, and put a ring on his finger and sandals on his feet. 23Bring the fattened calf and kill it, and let’s eat and celebrate! 24Because my son was dead and has come back to life. He was lost and has been found.’ And they began to celebrate.

Fully expecting only to be tolerated, he is surprised at his father’s reaction. It is said the reason the father ran to him and threw his arms around him was to PROTECT him from others. The disgrace this son inflicted on the family by his choice was punishable by DEATH. The father was keeping the neighbors from stoning him. That’s actually pretty intense… the father is not tolerating, but ACCEPTING the son! Not only accepting, but welcoming him back with a celebration! Beyond acceptance, he is celebrating the return. This is the point of the story where most stop… the lesson is you can always go home. Right?

The Story of the older brother

25“Now the father’s older son was in the field. As he was coming back to the house, he heard music and dancing. 26So he called to one of the servants and asked what was happening. 27The servant told him, ‘Your brother has come home, and your father has killed the fattened calf because he got him back safely.’

This epilog is the most important section to me. How many people even know this bit is here? When they do read this section, do they just gloss over it? A mistake. This is where the REAL lesson is… for the people who choose to do the “right thing”. Let’s look hard at this… first thing I notice is NOBODY told the older brother what was going on. He was out doing his daily routine… doing the “right thing” when he notices a party is going on. Notice he had to ASK what was going on… nobody thought to get a message to him. He is being taken for granted. Yikes!

28“Then the older son became angry and wouldn’t go into the house. So his father came out and began to plead with him. 29But he answered his father, ‘Listen! All these years I’ve worked like a slave for you. I’ve never disobeyed a command of yours. Yet you’ve never given me so much as a young goat for a festival so I could celebrate with my friends. 30But this son of yours spent your money on prostitutes, and when he came back, you killed the fattened calf for him!’

I get the anger. Here is the lesson… pay attention! His dad heard he was outside, refusing to come it… so he went out to see what was up. The older brother was pissed. What the hell… he worked hard his whole life to do the right thing… and his slacker brother did EVERYTHING wrong, and HE gets a full-blown PARTY! Not acceptable! So, is this story for slackers? All the slackers of the world think so… and are grateful for it. But I say this parable is ABOUT the OLDER BROTHER! It is REALLY for the persistent ones following the rules. They are taken for granted BECAUSE they are RELIABLE! This is the THANKS he gets…

Did the father help the older brother?

31“His father told him, ‘My child, you are always with me, and everything I have is yours. 32But we had to celebrate and rejoice, because this brother of yours was dead and has come back to life. He was lost and has been found.’”

Here it is… the REAL lesson of this parable. The inheritance belongs to those who persevere… doing the right thing all along. So, the payment is there… it is available ALWAYS! It is his TO TAKE! Seriously… he is a member of the NAME IT and CLAIM IT gang! All needs are covered and HE is taking THAT for granted… which it is. If he wants a party, he has the right to throw one himself! Everything IS the thanks he gets. A mighty nice thank you, if you think about it. So, you are NOT a doormat, you ARE a doorway!

A great way of BEING.

0 Comments on “The Story of the Loving Father”