I received a surprise package a few days ago. These were shrink wrapped on a piece of cardboard and placed in a box with a note. The note told me of a person who collected matchbooks from all over during their travels. These particular books of matches happened to have originated at the Shakey’s Pizza Parlor on Harbor Blvd in Anaheim… just a few blocks from Disneyland. The reason this person sent them to me is because of the fact that is the same place I was hired when I was 16 years old. (Apparently the person who had collected the matchbooks also put a note with them to say where they were from.)

Ah, memories… remember when smoking was allowed in restaurants? (Sometime last century…) In fact, the bar tender who worked weekends with me only had this part-time to pay for his cigarettes. Seriously… he had three cigarettes going at a time. One on the bar which he took a drag from when he took an order from someone, one next to the cash register for when he rang-up the order, and one down by the sink where he washed the beer glasses. I don’t think I ever saw him take a breath of fresh air. But, that isn’t why I am posting this.

When I opened the package, which was a complete surprise, I was amused and happy that someone was thoughtful enough to think of me. I set them down, and sent a thank you text to the person who sent them. After the brief text exchange, I looked again at the cardboard with the gift and noticed how many books of matches there were.

Oh wow! Four is kind of a big thing in my world since I wrote my book, Four Views of I – Instinct, Intellect, Intuition, and Intention. Irony is a good I-word… The more I looked at them, the more I thought about it. I notice there are three yellow ones and one red one. The red one represents Intention, or Spirit… see how I am? 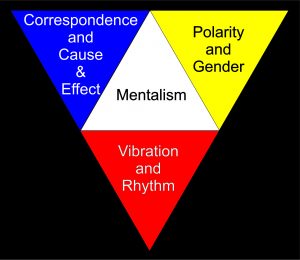 Seriously, the tetrahedron view of life is everywhere… in fact, I wrote a guest blogger on Wealth Creation Mastermind’s site recently.

Through this group I was introduced to the Kybalion and found the reading fascinating. I found that I could group the seven principles in the book into four groups which neatly fit into a tetrahedral view. That is what I wrote about in the five part series.

The first two parts are already live on the site, and I am quite excited they allowed me to present my view.

Click on the picture to the left and go check it out! (Part two is here) 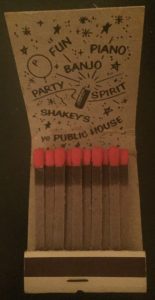 Anyway, back to the matches… I am still intrigued that the collector happened to have four books. It made me think about the days when a matchbook was a great, inexpensive marketing tool. Think about how special these are… each book has 20 matches in it. (I was pretty sure this was right, but I opened one to make sure… yup, 20) Why? You may ask… well, it just so happens that a pack of cigarettes has 20 of the cancer sticks in them. A matchbook like this was slim enough to slip in between the cellophane wrapper and the cigarette pack for portability.

These are safety matches… meaning that they were designed to only ignite when struck on the black strip at the bottom. (When I went backpacking, I preferred the “strike anywhere” wooden matches.)

I never smoked… but I remember this. In fact, I used to carry matches in my pocket just in case a girl needed a light. I didn’t believe in smoking, but I believed in girls… that was enough.

Anyway, back to the Four Views… I was thinking how each book represents each of the Four Views of an individual. These books are depositories of energy. Not only that, but they each contain enough energy to start twenty fires… It only takes a spark, to get a fire going… (How’s that for an ear worm?) 80 possible fires are at my fingertips… 20 each for Instinct, Intellect, Intuition, and Intention. That’s Body, Mind, Soul, and Spirit.

See what goes on in my mind… you should see it from inside! It gets noisy in here…