Stever Posted on May 10, 2017 Posted in Memoirs of a Heretic, Strait from Stever No Comments

I attended the 91 Freeway School of the Bible.

Let me explain: Riverside had “affordable” homes compared to Orange County, so many young families found homes to purchase there. We found a nice home in a nice neighborhood to start raising a family. The downside to living in Riverside California was the need to commute to work an hour or more, each way to where the jobs were. Often, I would spend up to three hours a day on the road. I enjoyed the solitude of commuting. This block of time was perfect for listening to teaching tapes. I could listen to a complete lesson each direction. So, the 91 Freeway became my seminary. I was tutored by many well-known teachers, names; Chuck Smith, John MacArthur are good examples.

But Chuck Missler is the one I listened to most. His style resonated with me. In fact, Chuck Missler is the one who pointed out that in our modern time, we could learn from the greatest teachers by listening to recordings of their teachings. Chuck provided his recordings to “Firefighters for Christ”, an organization with a mission to provide cassette tapes of bible teachers for free. Chuck’s exposition of the bible was quite deep, so required many lectures to cover each of the 66 books of the bible. I received hundreds of cassettes and listened to them all.

I mention this because I believe it was Chuck Missler who first taught me the Sea of Galilee / Dead Sea analogy.

If you have a bible with maps in the back, you can look for the map of the Holy Land. 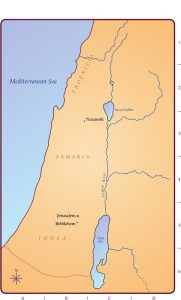 You will notice a river which flows into the Sea of Galilee from the north. This sea is one full of life… most of the stories of Jesus and his disciples happen around or on this beautiful sea. They were fishermen, and this sea provided their livelihood.

At the south end of the Sea of Galilee, the river continues out and flows into another sea. Look for the River Jordan. (This is a good spot to start up a spiritual song about looking up said river…) The river Jordan connects the Sea of Galilee with another big sea. This sea is aptly named the Dead Sea. This stagnant pool of water does not boast the same “Full of Life” properties.

Why is this? Both rivers are fed by the same source from the north. What makes the water in one sea living but the water in the other dead?

We can see from the map that the river flows THROUGH the Sea of Galilee, it is a conduit of the living waters.

But the Dead Sea is only receiving the water. It is hording the waters. The water stagnates, evaporates, and leaves an increasing concentration of sewage.

The analogy here is that we are like a sea. The river of life flows into us in the form of teachings we receive. If we share what we learn, the life will flow through us, providing more life for us and others. But, if all we do is take in but never allow the flow to continue, we will stagnate and die.

Don’t hold it in… let it flow!