The opposite of love is not hate… 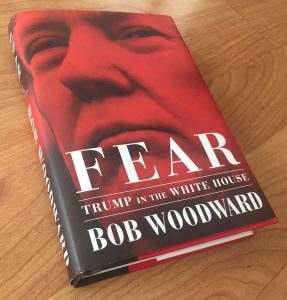 Fear – Trump in the White House

I must say, I took longer reading this than expected. Not because it is particularly hard to read, but because I have a lot going on, including other books I am reading. I know this book is feared by Trump supporters to the point of declaring it “fiction” and declaring it “fake news”. I believe I am the only one in my family to read it for just this reason. It is no secret that I am not a Trump supporter by any definition. I remember my school life being disrupted by the whole Watergate scandal, and how much I didn’t understand about what was going on at the time.

I found the read fascinating and found nothing in this book to be suspect in regard to it being factual. It seems very straight forward and plausible, especially because I remember the news reports, etc. More than that, I remember the tweets from the President… not because I saw them on “fake news”, but because I receive them on my phone when he tweets. 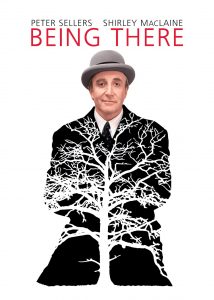 One thing I may have mentioned before, when the nation elected Donald J. Trump President, the first thing I thought of was a Peter Sellers (one of my heroes) movie, Being There

Peter played the role of a simple minded gardener who was beloved by his benefactor. He has spent his whole life tending the garden and has never left the property. Other than gardening, his knowledge is derived entirely from what he sees on television. When said benefactor passed away, he is told to move out.

While watching himself on TV in a store window he backs into the road and is hit by a limo. When they asked his name, the simple man said he was Hhance, the gardener, which they mistook as Chauncey Gardiner. Everyone assumed Chauncey was a genius or something, because he was so aloof (apparently).  He is taken up into Washington elites, where he is eventually the subject of whispered discussion over potential replacements for the President in the next term of office. They unanimously agree on Chauncey Gardiner as successor. 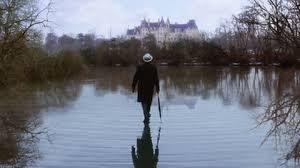 The end of the movie has Chance wander off and then walk off across the surface of a lake. Just to make sure we all know it is a lake, he paused to push his umbrella down into the surface of the water. Watch the movie and perhaps you will understand the connection.

This all came back to me when I read how much TV the President watches, getting all riled up in to full tweet mode… but I digress. 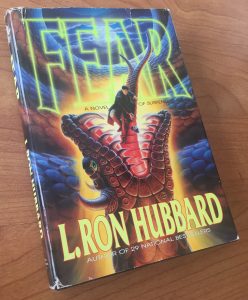 My whole point to this post is to encourage everyone to read this book. Seriously, it contains a lot of tidbits the supporters can get behind and show he is doing what he said he would do.

I really don’t see anything in the book I would consider “fiction” and I base this on the fact that I do read quite a bit. In fact, I have another book with the same title which IS fiction. I suggest comparing the two if you are not sure what the difference between non-fiction and fiction is. (L.Ron Hubbard is my “Catcher in the Rye” for those of you who’ve seen the Mel Gibson movie “Conspiracy Theory”.)

Some may argue that the cover art is interchangeable though.

One thing I do wonder about though… is Bob Woodward a fan of Douglas Adams? I only say this because when I finished the book, I realized the final chapter is 42. Is there a hidden message in it? Perhaps the final chapter is the only one you really need to read… so if you are hell bent on NOT paying for the book, wander into a bookstore and take a few minutes to read the last chapter. It is 15 pages long, so a bit daunting for some, but worth the read.

So, what I got out of this book. Fear is a management method used by many corporations in America to keep the Riff-Raff in line. It is one of the subjects I confronted my former boss about because I think it is the worst. I won’t even call it leadership, because it is not… it is management, and it throws synergy right out the window. Yes, it is likely a contributing factor of my termination from my last job, but I don’t bow to fear. I suppose the quote on the back cover is the reason I just don’t like him as President.

This is the reason for Bob’s choice for the title. Oh, and just to be clear, the opposite of Love is NOT Hate, it is FEAR.

Let me finish this with a shot of Chance doing what Chance loves: