Work is a four-letter ‘curse’ word

Stever Posted on December 8, 2018 Posted in Fables, Introspection, It's in The Bible!, Meme, Memoirs of a Heretic, Strait from Stever No Comments Tagged with Adam and Eve, Curse, Genesis 3, The Shining One, Work 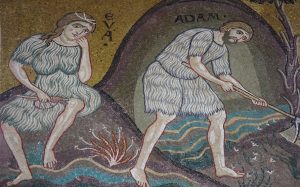 Everyone must work for a living, even the Apostle Paul told us if a man won’t work, he won’t eat. (2 Thessalonians 3:10)

The Bible tells us that when there were only two humans, the first (original) sin was committed. Oh, they both committed this sin, so even though it was the first two sins, they are considered the same one. Let’s go take a look at the story as told in Genesis Chapter 3 (from the ISV)

Now the Shining One was more clever than any animal of the field that the Lord God had made. He asked the woman, “Did God actually say, ‘You are not to eat from any tree of the garden’?”

First off, let’s talk about the Shining One. Who is this reptilian? We all think of him as a snake, but that is naïve. (If you want an interesting book, check out The Genesis 6 Conspiracy by Gary Wayne.) The general consensus is this serpent was indwelled by Satan himself. This very clever being chatted up Eve when Adam wasn’t around. This clever being asked a simple question: “Did God really say you can’t eat from any tree in the garden?” Notice he never mentioned any specific tree. Was this true ignorance on the Shining One’s part? Not likely.

“We may eat from the trees of the garden,” the woman answered the Shining One, “but as for the fruit of the tree that is in the middle of the garden, God has said, ‘You are not to eat from it, nor are you to touch it, or you will die.’”

I have often suggested in Bible Studies that I believe Eve was not told directly by God about the Tree of The Knowledge of Good and Evil, but she was told about it by Adam. And, I assume Adam pressed on her that it was so important that they couldn’t even TOUCH IT. Adam added that last bit. This was the weak link in the chain.

“You certainly will not die!” the Shining One told the woman. “Even God knows that on the day you eat from it, your eyes will be opened and you’ll become like God, knowing good and evil.”

I often picture the serpent tossing a piece of the fruit to Eve, which she absentmindedly catches. Right there, the trap was set. Holding the piece of fruit, or perhaps even dropping it, put doubt in her mind. I can imagine Eve fascinated that the serpent handles the fruit, even eats it with no ill effect. But, by tossing it to her, he proves she could touch it without dying. Then he presses on with THE TRUTH that if she eats it, her eyes will be opened and she will know good and evil, just like God.

When the woman saw that the tree produced good food, was attractive in appearance, and was desirable for making one wise, she took some of its fruit and ate it. Then she also gave some to her husband who was with her, and he ate some, too. As a result, they both understood what they had done, and they became aware that they were naked. So they sewed fig leaves together and made loincloths for themselves.

Now, whilst I speculate with this story, I suspect that Eve didn’t eat the fruit right then and there in the Serpents presence, but rather she took a piece of fruit with her and decided later. Then, she ate it with Adam, perhaps not letting him know what it was. Not that she lied about it, but rather just omitted that piece of information. I say this because she didn’t have the shame of being naked until Adam did too. Also, she gave some to Adam “who was with her.” Neither here nor there. The point is, they both did it. They both realized they were naked. They both made loincloths out of fig leaves to cover their shame. (Allow me to point out that nothing is said of Eve making a top out of fig leaves.)

“I heard your voice in the garden,” the man answered, “and I was afraid because I was naked, so I hid from you.”

“Who told you that you are naked?” God asked. “Did you eat fruit from the tree that I commanded you not to eat?”

Now, I often read quite a bit into a story, but I can’t help but think there was the possibility that the Serpent may have taught them shame. It is often taught that God knew all along what had happened but was toying with them. I suspect that God genuinely wanted the answer to be anything but what it was.

The man answered, “The woman whom you provided for me gave me fruit from the tree, and I ate some of it.”

Way to MAN UP Adam! Blame Eve! Perhaps Adam genuinely didn’t know it was THAT fruit when he ate it. Another possibility is that Adam knew Eve was going to be punished, perhaps killed, because she ate of the fruit. Adam loved her so much, he ate it so he would be with her no matter what happened. The fact is, Adam had more ribs, she could’ve been replaced. (I could even speculate their eyes were open to the fact that there would be no human race without them both.)

Then the Lord God asked the woman, “What did you do?”

“The Shining One misled me,” the woman answered, “so I ate.”

So, it is apparently a human trait to blame others. Adam blames Eve, Eve blames The Shining One. I notice two things here, God only asked Eve. See, Adam’s response was all about being naked and hiding. Adam confessed to eating the fruit that Eve gave him, true. But God only asked Eve. The second thing I notice is God never asked The Shining One what he had done. God new all the facts at this point and had to explain the consequences in order of guilt.

The Lord God told the Shining One,

“Because you have done this,
you are more cursed than all the livestock,
and more than all the earth’s animals,
You’ll crawl on your belly
and eat dust
as long as you live.
“I’ll place hostility between you and the woman,
between your offspring and her offspring.
He’ll strike you on the head,
and you’ll strike him on the heel.”

He told the woman,

“I’ll greatly increase the pain of your labor during childbirth.
It will be painful for you to bear children,
“since your trust is turning toward your husband,
and he will dominate you.”

Notice the word “curse” is not used to describe the consequences for Eve. The consequence is two-fold, first, the pain of childbirth. I believe this is much more than the physical pain of the actual birthing process. It includes that mother-child bond that goes right to the heart and the pain goes all through life. It is because of this bond the woman must rely on the man. The selfish gene was turned on here. Remember, when Eve was originally made, she came from Adam’s side, as an equal. The whole male dominance thing is the second part of the consequence.

He told the man,

“Because you have listened to what your wife said,
and have eaten from the tree about which I commanded you,
‘You are not to not eat from it,’
cursed is the ground because of you.
You’ll eat from it through pain-filled labor
for the rest of your life.
It will produce thorns and thistles for you,
and you’ll eat the plants from the meadows.
You will eat food by the sweat of your brow
until you’re buried in the ground,
because you were taken from it.
You’re made from dust
and you’ll return to dust.”

Please notice that the curse here is not on Adam directly. It is the ground that is cursed because of this sin. The consequence Adam faces is he now has to work the ground to eat. Not only that, but the whole ecology of the planet is disrupted and now plants are corrupted, and thorns and thistles compete with the fruit plants. The earth is ruined because of man. And it just keeps getting worse. I say WORK is a curse word because of this imbalance caused way back in the beginning. What this tells me is work was not part of the original plan. It is a consequence because of the cursed earth.

Now Adam had named his wife “Eve,” because she was to become the mother of everyone who was living. The Lord God fashioned garments from animal skins for Adam and his wife, and clothed them.

See, we get the reason Adam had named his wife Eve. It isn’t that he didn’t name her until after the fall… Adam was given the pleasure of naming every animal and plant on earth right from his first day. No, this just highlights what I mentioned before, that Adam knew the whole human race would come from him and her. It is an important note that God made animal skin suits to cover their shame. This is where animal sacrifice was instituted. (See, in order to get animal skins, the animals have to be killed.) The blood sacrifice was instituted by God, and the first death was by His hand. I suspect that is exactly what the curse is, and why the plants started dying and mutating. Death is the curse of the ground.

Later, the Lord God said, “Look! The man has become like one of us in knowing good and evil. Now, so he won’t reach out, also take from the tree of life, eat, and then live forever—” therefore the Lord God expelled the man from the garden of Eden so he would work the ground from which he had been taken. After he had expelled the man, the Lord God placed winged angels at the eastern end of the garden of Eden, along with a fiery, turning sword, to prevent access to the tree of life.

Here we find that now there is another tree forbidden to Adam and Eve. The curse wouldn’t work if they found a way to live forever. Notice the chapter ends with banishment from the Garden of Eden. There is a feeling of dimensional shift here… but we will look at where the Garden of Eden IS some other time. Apparently, it is somewhere we could get to, so a guard had to be set up, flaming sword and all!