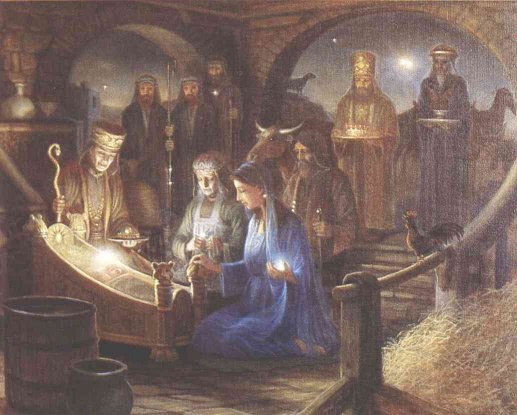 Today I am writing about the Magi. Magi is the plural form of Magus. So, we know there are more than one who arrived to visit Jesus after he was born, traditionally there were three. This word is also the root for our word Magic. So, Images are visualizations (images, that is the same root too). I think of Mickey Mouse as the Sorcerer’s Apprentice for some reason. First of all, these Magi are also thought of as Kings from the East. Let’s take a look at the passage in the bible that tells of this visit. Luke 2:1-2:

After Jesus had been born in Bethlehem of Judea during the reign of King Herod, wise men arrived in Jerusalem from the east and asked, “Where is the one who was born king of the Jews? We saw his star in the east and have come to worship him.”

The wise men are named Gaspar, Balthasar, and Melchior. Right?  Balthasar is often represented as a king of Arabia or sometimes Ethiopia, Melchior as a king of Persia, and Gaspar as a king of India. Well, seriously, that is a lot of conjecture. The Bible doesn’t say how many there were, and it says they are from “the East”. Oh, and the “wise men” are called Magi.

Also, just three guys on camels is not likely accurate. Think about it. Even if these guys weren’t kings, they were rich and didn’t travel anywhere without an entourage. It is likely this caravan had close to 100 people in it. So, they were quite noticeable when they showed up to Jerusalem. When they inquired, people took them seriously. Here is some more of the story (Verses 3-8):

When King Herod heard this, he was disturbed, as was all of Jerusalem. He called together all the high priests and scribes of the people and asked them where the Messiah was to be born. They told him, “In Bethlehem of Judea, because that is what was written by the prophet:

‘O Bethlehem in the land of Judah,
you are by no means least among the rulers of Judah,
because from you will come a ruler
who will shepherd my people Israel.’”

Then Herod secretly called together the wise men, found out from them the time the star had appeared, and sent them to Bethlehem. He told them, “As you go, search carefully for the child. When you find him, tell me so that I, too, may go and worship him.”

King Herod was quite interested in knowing what they were doing in his town. Oh, and I am sure his audience with them was not just a quick meeting, that likely took a few days to set up and put on. Then, he had his advisors look into the prophecy, which took another day or two, I’m sure. Our stories have reduced this meeting to a quick meeting on the road, where Herod had his advisors with them and they just happen to carry the specific books they needed to provide the collaborating information. (Which pinpointed the location of Bethlehem and Jesus for them.) 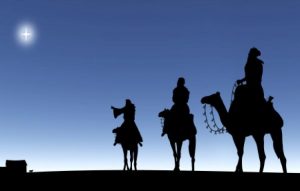 The point being, they did NOT show up the same night as the Shepherds. So, thinking of the Magi in Christmas Eve is just wrong… at best, they showed up on the 12th day of Christmas. Which is what the Feast of the Epiphany on January 5th is all about. (Oh, that reminds me, the Five Golden Rings. Did you know there were Five Philistine Cities which ‘hosted’ a visit of the Ark of the Covenant? Did you also know each of these cities was struck by a plague because of the Ark’s presence? Furthermore, the plague was people dying of tumors, or as better translated, hemorrhoids. When the Philistines decided to send the Ark back, the included golden hemorrhoids as a sacrifice. Think of that whenever you sing, “Five Golden Rings!” But I digress…) Let’s look at more of the story (Verses 9-12):

After listening to the king, they set out, and the star they had seen in the east went ahead of them until it came and stopped over the place where the child was. When they saw the star, they were ecstatic with joy. After they went into the house and saw the child with his mother Mary, they fell down and worshipped him. Then they opened their treasure sacks and offered him gifts of gold, frankincense, and myrrh. Having been warned in a dream not to go back to Herod, they left for their own country by a different road.

So, they went and found where Joseph, Mary, and Jesus were. (The shepherds were already gone.) So, here we find something listed which might explain why people think there are three Magi. There are three separate gifts listed and assume only one gift per Magus. Oh, and those three gifts they brought? Is it possible they were of antediluvian origin? Quite possibly they were handed down through this secret society of Magi who perhaps were originated by Daniel while in Babylon. There is a lot of background we don’t see in the bible narrative. Everything in the Old Testament was pointing forward to Jesus’ birth, and everything in the New Testament is pointing back at it. (The incarnation was around thirty years, and then it was ended on the cross.) Don’t get upset… the resurrection came next, but Jesus was no longer incarnate, he got a NEW GLORIFIED BODY. He could walk through walls and fly. Just sayin’. Just as is promised to all of us. As a matter of fact, we are promised a New Heaven and a New Earth too. Everything will be made new. 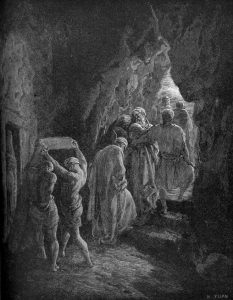 This was big event and one that the Magi had prepared for generations to participate in. The Gold, Frankincense, and Myrrh were passed on to Jesus to complete his mission as the Last Adam. This is a good place to think about who these Magi were. But, before that, let’s discuss those three gifts. Have you ever heard that these gifts may have been antediluvian? There is a cave where all the patriarchs before the flood were buried. It’s called the Cave of Treasures. A strange story has Noah and his sons went into the cave to retrieve the bones of Adam. Apparently, Noah was instructed to bring the bones on the Ark with him during the flood. (From the Book of the Cave of Treasures)

…his firstborn Shem carried the gold, and Ham carried the myrrh, and Japhet the frankincense, and they went forth from the Cave of Treasures.

So, it seems there is a connection with this event and the gifts given to Jesus. This also a good place to talk about how these could’ve been handed down. This requires a bit of knowledge of a guy name Belteshazzar who was Nebuchadnezzar’s top Magician. (Daniel 4:9) 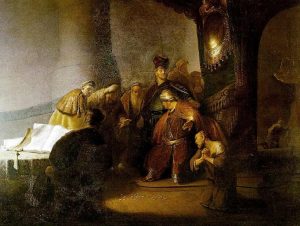 Belteshazzar, chief of the diviners, since I know that the spirit of the holy gods is within you, and no mystery too difficult for you, explain to me the vision of my dream that I saw, along with its interpretation.

So, these four (I like THAT number) guys are likely the ones who were the guardians of the treasures and were the ones who set up the Belteshazzar Cult which watched the stars for the sign of the coming of the Messiah. So, it seems the Magi who showed up to worship the newborn king were TRUE BELIEVERS. Think about it. It also explains why God would warn them in a dream to not go back to Herod. Yes, the story goes on. Let’s look at the rest of the story (Matthew 2:13-18): 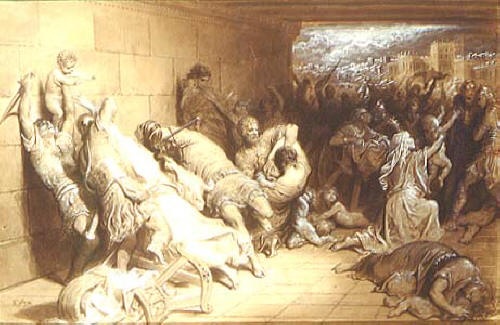 After they had gone, an angel of the Lord appeared to Joseph in a dream. “Get up, take the child and his mother, and flee to Egypt,” he said. “Stay there until I tell you, because Herod intends to search for the child and kill him.” So Joseph got up, took the child and his mother, and left at night for Egypt. He stayed there until Herod’s death in order to fulfill what was declared by the Lord through the prophet when he said, “Out of Egypt I called my Son.” Herod flew into a rage when he learned that he had been tricked by the wise men, so he ordered the execution of all the male children in Bethlehem and all its neighboring regions, who were two years old and younger, according to the time that he had determined from the wise men. Then what was declared by the prophet Jeremiah was fulfilled when he said, “A voice was heard in Ramah:
wailing and great mourning.
Rachel was crying for her children.
She refused to be comforted,
because they no longer existed.”

King Herod was quite paranoid, and had already had potential usurpers to his throne murdered. He was not about to let some new upstart take his throne away. He had his advisors pinpoint where and when this newborn king arrived. They could only generalize, and they didn’t know specifically who it was. So, King Herod in all his wisdom just had every male child under two years put to death. (Remember, this is an echo of what happened when they tried to kill off Moses… late term abortion of all males which happened at birth because that was the only way they knew the gender back then.) Anyway, this tells us that the visit of the Magi could’ve been up to two years after his birth. Jesus may have been a toddler by then. 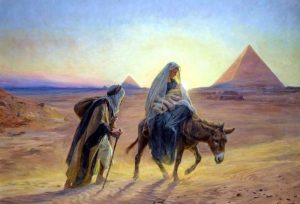 Oh, and it also tells us why Jesus lived in Egypt… Anyway, this all is leading up to the post tomorrow – Immanuel