The Fifth of November

412 years ago, a plot was instigated to kill King James and Parliament on November 5th, 1605, when they met; by blowing up the building they met in. The Catholics of England were being repressed, and decided to fix things. (I am reminded of the scene in Mars Attacks where the Martians blow up congress…)

The fifth of November,

The Gunpowder treason and plot;

I know of no reason

Why the Gunpowder treason

Should ever be forgot!

Guy Fawkes and his companions

Did the scheme contrive,

To blow the King and Parliament

But, by God’s providence, him they catch,

With a dark lantern, lighting a match!

A stick and a stake

If you won’t give me one,

The better for me,

And the worse for you.

A penn’orth of cheese to choke him,

A pint of beer to wash it down,

And a jolly good fire to burn him.

Growing up, I remember my mother mentioning Bonfire Night, which I often confused with Shrove Tuesday (Mainly because I wanted some “English” pancakes.) She would mention something about burning someone in effigy, but I never really understood what it was all about. She was a patriot and so was obligated to remember. Having converted to Catholicism when she married my dad, she failed to mention The Pope was one of the effigies of the celebration.

It wasn’t until the movie V for Vendetta came out that I found out anything more about this event. I found out that Guy Fawkes was the name of the villain of the story, and that is who the famous mask in the movie represents. Of course, he was not alone in this plot, and if I had been raised in England I would know that.

My Lord, out of the love I bear to some of your friends, I have a care of your preservation. Therefore I would advise you, as you tender your life, to devise some excuse to shift your attendance at this parliament; for God and man hath concurred to punish the wickedness of this time. And think not slightly of this advertisement, but retire yourself into your country where you may expect the event in safety. For though there be no appearance of any stir, yet I say they shall receive a terrible blow this Parliament; and yet they shall not see who hurts them. This counsel is not to be condemned because it may do you good and can do you no harm; for the danger is passed as soon as you have burnt the letter. And I hope God will give you the grace to make good use of it, to whose holy protection I commend you.

The plot was uncovered by an anonymous note to one of the attendees of the event warning him not to go. (Ever hear stories like this about 9-11?) King James was shown the note on November 1st and when he saw the words “terrible blow” in the note, he thought of gunpowder (which happened to be what killed his father). Guy Fawkes was found in the cellar with the 36 barrels of gunpowder on November 4th, and was arrested. (I notice that the number is exaggerated to three score or 60 barrels in the poem.) He used the alias John Johnson, and was wearing spurs and had a lit lantern along with a pocket watch. (Since he was the “Guy” with the who was to light the fuse, he was memorialized in the verse.) John Johnson claimed he was from York and had been “acting alone” to kill the King and Parliament. He was quite resolve in his “lone gunman” stance. He had a letter in his possession addressed to Guy Fawkes, which, when caught red handed, he admitted was an alias of his.

The King was impressed by his resolve in his story, but ordered him tortured to determine the truth, which was “racked” up quickly. Having been tortured, Guy Fawkes could barely write, so his signature if a bit hard to see.

The others were quickly rounded up too, and by the end of January the next year (1606), most of the conspirators were gruesomely executed, being hanged then drawn and quartered. (I recommend reading all about this at https://en.wikipedia.org/wiki/Gunpowder_Plot)

Although Catesby and Percy escaped the executioner, their bodies were exhumed and decapitated, and their heads exhibited on spikes outside the House of Lords. On a cold 30 January, Everard Digby, Robert Wintour, John Grant, and Thomas Bates, were tied to hurdles—wooden panels—and dragged through the crowded streets of London to St Paul’s Churchyard. Digby, the first to mount the scaffold, asked the spectators for forgiveness, and refused the attentions of a Protestant clergyman. He was stripped of his clothing, and wearing only a shirt, climbed the ladder to place his head through the noose. He was quickly cut down, and while still fully conscious was castrated, disembowelled, and then quartered, along with the three other prisoners.

The following day, Thomas Wintour, Ambrose Rookwood, Robert Keyes, and Guy Fawkes were hanged, drawn and quartered, opposite the building they had planned to blow up, in the Old Palace Yard at Westminster. Keyes did not wait for the hangman’s command and jumped from the gallows, but he survived the drop and was led to the quartering block. Although weakened by his torture, Fawkes managed to jump from the gallows and break his neck, thus avoiding the agony of the gruesome latter part of his execution.

Steven Littleton was executed at Stafford. His cousin Humphrey, despite his cooperation with the authorities, met his end at Red Hill near Worcester. Henry Garnet’s execution took place on 3 May 1606.

So, what do I take away from all of this? First, I know that the victors have control of the historical narrative. Many facts are discarded as unneeded, and other “facts” are tailored. I know that celebrations and “Never Forget” mantras are popularized in conjunction with the official story. Control the Narrative – Control the World. Strangely, (sarcasm alert) the Bonfire Night celebrations (also known as Pope Night) ceased in the American Colonies in 1776. Patriotism in this country shifted to sympathize more with the conspirators of 1605.

As the Commander in Chief has been apprized of a design form’d for the observance of that ridiculous and childish custom of burning the Effigy of the pope—He cannot help expressing his surprise that there should be Officers and Soldiers in this army so void of common sense, as not to see the impropriety of such a step at this Juncture; at a Time when we are solliciting, and have really obtain’d, the friendship and alliance of the people of Canada, whom we ought to consider as Brethren embarked in the same Cause. The defence of the general Liberty of America: At such a juncture, and in such Circumstances, to be insulting their Religion, is so monstrous, as not to be suffered or excused; indeed instead of offering the most remote insult, it is our duty to address public thanks to these our Brethren, as to them we are so much indebted for every late happy Success over the common Enemy in Canada. 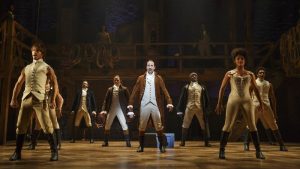 Tonight, I have the honor of attending a performance of Hamilton at the Pantages Theater. The one thing we can learn from this bit of American History is the fact that the Pen is truly mightier than the Sword! One thing this “Bastard son of a Whore” is remembered for is his Writings. I admire what I’ve learned about Alexander Hamilton from listening to the sound track of this Hip Hop Opera so far, and am excited to see how it is presented on stage.

0 Comments on “The Fifth of November”