Stever Posted on May 31, 2017 Posted in Movie Review, Reviews, Strait from Stever No Comments

A review of King Arthur:Legend of the Sword 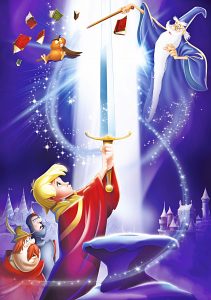 I am drawn to books and movies about the Pendragon Family line. (A favorite book trilogy of mine on the Arthur legend is by Stephen R. Lawhead: Taliesin, Merlin, and Arthur) So, it is no surprise I wanted to see the new movie of the Arthur legend. 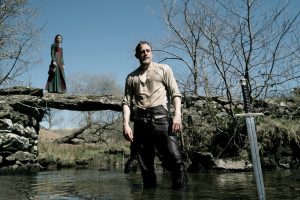 In the opening scene, we are told Humans and Mages usually live in peace as we see Tolkienesque behemoth elephants attacking a stronghold. Uther Pendragon defends his realm with Excalibur, defeating the attacking mage army against all odds. Quite spectacular visuals. The victory is short lived when Uther detects treason and whisks his queen and son through a secret exit, but is unsuccessful in saving his queens life in an attack from a mage. Uther does succeed in getting his infant son into a boat, which floats down the river Thames. 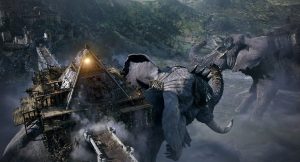 The boat comes ashore near a brothel. Young Arthur is adopted by the working girls, just like Moses. Here we are given a mind-numbingly fast montage of Arthur growing up in the brothel, becoming quite hardened by living on the streets. Finally we get into the meat of the story… with epileptic-fit inducing action scenes interjected along the way. Some scenes felt more like Robbing Hood… Arthur and his Merry Men have quite the gangland they control. (I must admit to Monty Python and the Holy Grail flashbacks while watching this. But, that happens more often than I like to admit.) 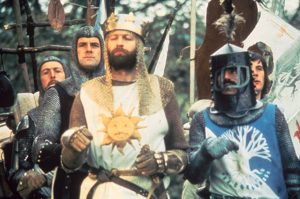 A quick note about my favorite character in the movie, The Mage. Imagine April Ludgate from Parks and Rec with Super Magical Powers! This girl kept Arthur alive despite himself. She is the hero in my view… nicely done. I would really like to see a Mage spin off.

I was a bit taken back by Arthurs contempt and distain for Excalibur. Yes, he was a reluctant hero… but even after he accepted his hero role, he dragged the sword around, literally. He never once held it aloft in honor. Excalibur used Arthur like The Force used Jar-Jar Binks. Arthur just held on to the hilt and Excalibur did the real work. Arthur did employ a great Errol Flynn swagger though.

Now, don’t get me wrong. I enjoyed the movie. The acting was fine. Action sequences were a bit much at times… but still, I just couldn’t help thinking of it as Holy Grail meets Fast and Furious. On the plus side, this movie provides excellent MST3K fodder!