↓ Skip to Main Content
Home › Introspection › What is Rousseau Arts?

What is Rousseau Arts?

What is the mission statement?

Succinctly, Rousseau Arts is dedicated to inspiring thought and creativity through balance of Science and Art.

Why am I here?

A question we should all ask. It may just happenstance… and there really is no reason. What happens, happens. Period. Admittedly I am not ready to concede that. For now, I move forward with the premise that I am here for a reason. So, perhaps a recap of what I have been thinking about is in order.

First, let me share about the two historical Rousseaus I grew up believing I had a family link to. Henri and Jean Jacques… Art and Science. Feeling and Fact. Intellect and Intuition. The yin and yang of my family name. 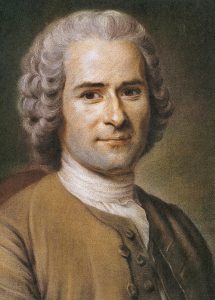 For me, science is equated to Philosophy. That is why I put Jean-Jacques in that camp. Jean-Jacques is a favorite of mine because of a quote about a man building a fence and claiming the property as his own. I think he is not surprised that a person would do that, but he IS surprised that everyone else just accepted it.

“The first man who, having fenced in a piece of land, said “This is mine,” and found people naïve enough to believe him, that man was the true founder of civil society. From how many crimes, wars, and murders, from how many horrors and misfortunes might not any one have saved mankind, by pulling up the stakes, or filling up the ditch, and crying to his fellows: Beware of listening to this impostor; you are undone if you once forget that the fruits of the earth belong to us all, and the earth itself to nobody.”

So much of what today’s world is built on is due to the philosophical thoughts of JJ Rousseau… Even in Japan, people mentioned him when they read my name.

The first mention of a historical Rousseau in my life wasn’t JJ because of my family’s history of Framing and Art. 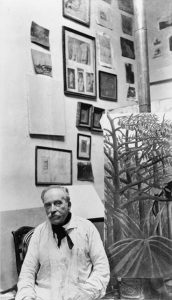 What I like about Henri is his complete faith in his art. I think he truly believed the world he imagined was true reality. Picasso promoted him… just sayin’. 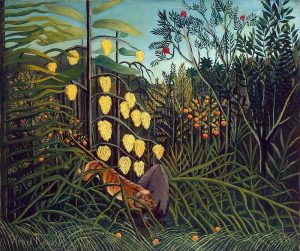 The best example is his portrayal of how bananas grow. I believe it shows he had never seen an actual banana tree, only banana bunches. Look at the leaves and foliage in his work… he had a good imagination. He assumed they grew the same way more familiar fruit grows, hanging down, like apples and peaches. 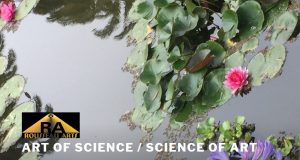 A tagline for the website is Art of Science / Science of Art. Connecting this with the Book of I, I would group Instinct and Intellect with Science. I would group Intuition and Intention with Art. Physical and non-physical. For me it lines up with the dual nature of mankind…

So, I wonder, does this duality make sense?