Stever Posted on December 22, 2018 Posted in Book of I, Introspection, It's in The Bible!, Meme, Memoirs of a Heretic, Popular Paradigms No Comments Tagged with Christmas, House of David, Immaculate Conception, Mary, Mother of God, Virgin Birth

Today and for the next four days we will take a look at aspects of the Christ Mass, commonly known as Christmas, the time Christians celebrate the Birth of Christ. (Of course, Jesus wasn’t really born on December 25th… but I will keep Saturnalia out of this post.) This first post is about the Mother of God, as she is known by many. (We will ignore what that name implies, and for now just accept it as a “mystery”.) Let’s begin with a verse from the Bible, from the Gospel of Luke (1:26-38) specifically:

…the angel Gabriel was sent by God to a city in Galilee called Nazareth, to a virgin engaged to a man named Joseph, a descendant of David. The virgin’s name was Mary. The angel came to her and said, “Greetings, you who are highly favored! The Lord is with you!” Startled by his statement, she tried to figure out what his greeting meant.

Here is a good point to interject exactly what is meant by the Immaculate Conception. For quite a bit of my life, I had erred in believing this referred to the conception of the Christ leading to the virgin birth of Jesus. Nope… not the same thing. The immaculate conception is referring to the conception of Mary. When Gabriel said Mary was highly favored, he was referring to her perfected conception. Something that was specifically done by the Spirit of God at her conception in her mother’s womb. Yes, this is hard to grasp if you’ve always thought the only perfect conception was done in Mary’s womb. But, the logic seems sound, because in order for the virgin birth of The Christ to occur, it had to be in a womb that was not corrupted genetically.

Keep in mind that the enemies of God had been working hard at corrupting the genetic lineage from the Garden of Eden. In fact, they had succeeded well enough that they had almost succeeded in corrupting the entire human race. It was the intervention of Noah’s Flood that ended that. But, of course, the enemies were thwarted and immediately attacked continuously through history since then too. (Read the book, The Genesis 6 Conspiracy by Gary Wayne for more info.) So, because of this, the lineage of King David was corrupted beyond hope, or so it seemed. See, the prophecies were studied by the enemies, and they targeted that lineage to make sure the prophecies could never be fulfilled.

In fact, all the men in the legal lineage were corrupted. Period. 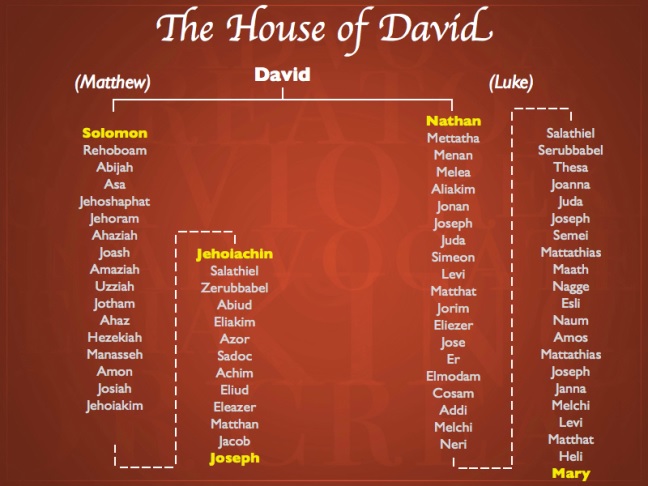 The genealogy in Luke begins with Adam. This is the one I will focus on today, because it aligns nicely with Instinct (Body) as I describe in my book, Four Views of I.

Then the angel told her, “Stop being afraid, Mary, because you have found favor with God. Listen! You will become pregnant and give birth to a son, and you are to name him Jesus. He will be great and will be called the Son of the Most High, and the Lord God will give him the throne of his ancestor David. He will rule over the house of Jacob forever, and his kingdom will never end.” Mary asked the angel, “How can this happen, since I have not had relations with a man?”

So, something has set Mary apart from ALL women. Not because of anything she did, but because of what The Spirit of God did. She was somehow modified in the womb to be the perfect host. (Now I sound like a narrator for Ancient Aliens or something…) There is something about her DNA that makes her the only person who can mother a male child as a virgin. See, parthenogenesis can occur, but for a virgin to conceive a child, that child would have only her DNA… thus would have to be female. See, even though it has been a long time since I took Biology, I do remember that all women have two X chromosomes, and all men have one X and one Y chromosome. It is the Y chromosome that makes the male. So somehow a Y chromosome was included, injected, or otherwise miraculously occurred. Apparently, this was a two-step process… step one occurred at the conception of Mary and step two occurred at the conception of Jesus. This is why Catholics believe in the Immaculate Conception of Mary. It is not saying she was born of a virgin too… it is saying that the Holy Spirit did something to Mary at conception. (This brings to mind another person who was considered “perfect in his generations”, that person is Noah. It is all about keeping the lineage from corruption.)

The angel answered her, “The Holy Spirit will come over you, and the power of the Most High will surround you. Therefore, the child will be holy and will be called the Son of God. And listen! Elizabeth, your relative, has herself conceived a son in her old age, this woman who was rumored to be barren is in her sixth month. Nothing is impossible with respect to any of God’s promises.” Then Mary said, “Truly I am the Lord’s servant. Let everything you have said happen to me.” Then the angel left her.

So, in order to seal the deal with phase two of the conception of a male child in a virgin, The Holy Spirit did some manipulation in Mary to make it work. Because she is a virgin, the child does not have a human father. The child is the Son of God. A direct creation of God. (A note, Adam was a direct creation of God, and is a Son of God. As were all the Angelic beings. All other humans, including Eve, are derived from other humans.) Adam was created out of the dust of the Earth. Eve was created out of Adam’s rib. It is the flesh that defines a human. For the Christ to be a kinsman, he had to be born of a human. That human was Mary, who had to be conditioned for the task.

Oh, and Elisabeth is a relative of Mary, who happens to be the mother of John the Baptist. I had always thought Elisabeth and Mary were sisters, and thought John and Jesus were cousins. But, I now realize they were related, but not as close as I thought.

One belief is that the genealogy of Jesus as listed in Luke is the lineage from David, through Nathan, the brother of Solomon up to Mary, his mother. The only problem with this is that the genealogy doesn’t end with Mary’s name, but with Joseph’s. Still, it is an intriguing thought, and perhaps if there is a reason, we could find out exactly why Luke wrote it the way he did. (Of course, there could be something missed in translation too.) Neither here nor there… the whole point of this story is that Jesus is born of a Virgin.

This was prophesied in the Old Testament, stated in the New Testament, and confirmed in the Qur’an. Yes, that is true. Islam believes Jesus is born of a virgin too! I didn’t know that until today!

So, the Gospel of Luke tells us the story of Jesus’ DNA and his humanity. It is why I connect this with Instinct or body. I chose the I-word immaculate for this first view. (Four views… it is why there are four gospels in the bible too.)

Tomorrow we will take a look at the birth of Jesus… The Incarnate God.